Around August of last year, the time-series database I was using, TempoIQ, announced that they were not offering their data ingestion and storage plans any more. During the 2 week grace period until their server-shutdown, I looked through other alternatives to TempoIQ, such as Influx Data, RethinkDB, and finally AT&T M2X. I eventually picked AT&T M2X because I was able to write to the database via http as well as https, which is useful for low powered microcontroller platforms. Furthermore, it was the most economical solution offered.

The latest version of the PICKLE is comprised of a Plantower PMS5003 laser air quality detection sensor module (14$) and a Particle Photon (the microcontroller with built-in Wifi and a cloud service). As the data (LPO) is fed into the Photon, the microcontroller pushes the data to the M2X database as well as the Particle cloud. The Particle cloud plays an integral role in this setup because it makes it very trivial to manage multiple monitors simultaneously. For example, if I have 20 of these modules deployed in the field and I want to make a change to the program on each of the microcontrollers, rather than painstakingly tracking down each monitor and updating it, the Particle cloud allows you to manage all of the nodes—all through the cloud. 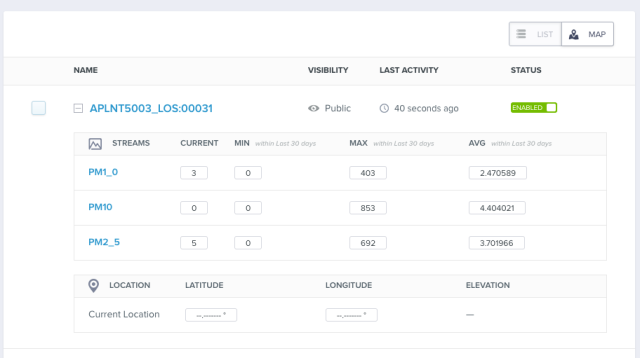 Another neat feature of AT&T M2X is that you can opt to make your databases public; that is, anyone can view your data without having explicit permission. For example, to view live updates from the monitors in your console (terminal), simply run

Here is a live stream from one of the monitors in my house (averaged over 10 minutes for the past 24 hours). Note that the time is in GMT.

I am currently interning at the Bay Area Air Quality Management District (BAAQMD) for the summer of 2017; more to come on that later!

1 Response to Switching to AT&T M2X