The last monitor I built, the Pickle was based on the PPD60PV-T2. It was super cool to see that adding the fan fused to the T2 would improve the performance so much that it worked pretty close to the AES-1 from Shinyei.

However, the T2 is kinda expensive and I wanted to see if the same fan idea would work with the cheaper sensors, the PPD42 in particular. As a result, I built the Pickle Jr – which is the 42 with the fan connected to the same Arduino Ethernet I used for the T2. I did the same thing as with the T2 i.e. added the L-shaped connector from Rain Drip and then fitted the fan on top.

So the Rain Drip is cut just like for the T2 and then glued with black epoxy to the 42. The challenge with the 42 is that there is no circular hole at the bottom of the plastic enclosure so I had to cut a ⅜” hole thru the plastic. It was tough as the top lid kept wanting to come off. But it worked at the end. Then I snipped off the heater resistor as well. The T2 had different connectors for the heater but the 42 does not.

It looks slanted, but it is not, this is due to the weight of the fan+Raindrip. 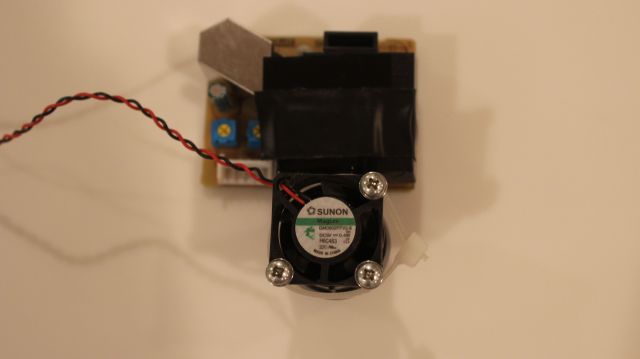 The fan is a Sunon that is rated for 5v, but I plugged it into the spare 3.3v connection on the Arduino.

So air flows into the top opening of the 42 and is sucked out by the fan at the bottom. It is pretty airtight, as a next step I am going to remove the cable tie as well – I did not use the cable tie for the T2.

Next…Measuring and Calibrating the 42 with fan….